A Bedroom Makeover In Organizational Style

This project was a labor of love, and this already organized vintage-styled bedroom went through an evolution of being a MORE organized bedroom, with many re-decorating touches all over.

It all started in one of the clothes closets. A new solution for the accumulated collection of scarves was needed. So, using two long towel racks side-by-side, the scarves were draped over the rods along the inside wall of the small walk-in closet. Purses were hung on over-the-door hooks, as well as a hook-hanger at the end of the clothes rod. 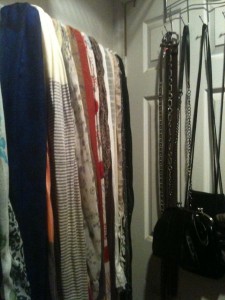 It all worked out (of course!), thanks to switching from plastic hangers to slim velvet hangers. Top that off with the use of cascading hooks in the smaller closet, along with a double hang rod in the larger closet, and the space in both closets were doubled! 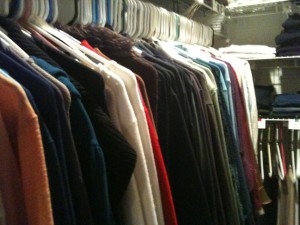 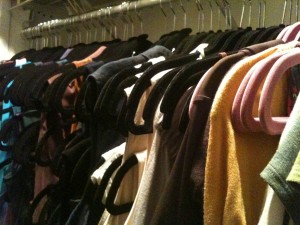 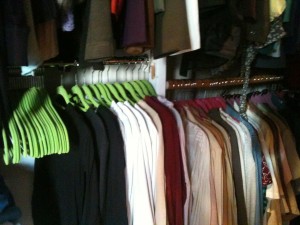 The only thing left to do was replace the rest of the plastic hangers with slim velvet hangers in the larger reach-in closet.

So, with the closet re-organization done, it was time to re-decorate!

It was decided that a good starting point was the mirrored sliding doors on the reach-in closet that was just finished. With the mirror facing the bed, it is believed that this is “bad Feng Shui”, therefore had to go! 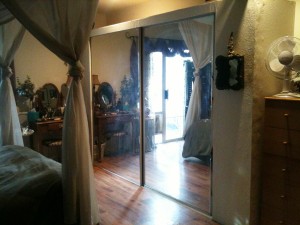 Curtains have become a trend for replacing sliding closet doors – especially because large sliding doors are heavy to push and often hide a portion of the closet when opened (due to overlap), which these did.

Replacing the doors with curtain panels in three different colors (purple, beige, ivory) really added a nice feel to the room. And no more issues with hard-to-reach clothing! 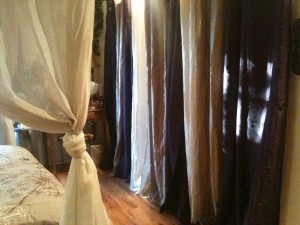 Here’s a couple views of the “before” – with dark green tones on bedspread, chair cover and throw blanket, and no other color, per se. There were actually some decorating evolutions before finally changing out color scheme (like adding a new headboard). 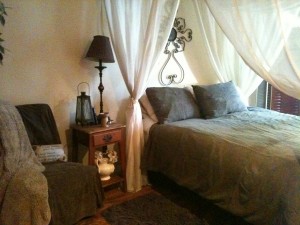 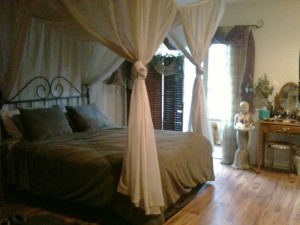 Then, to brighten up the space, a lighter color bedspread with accents of purple from the curtains would bring it all together. That, and removing the dark chair cover, and adding a purple throw pillow. And, wha-la! … 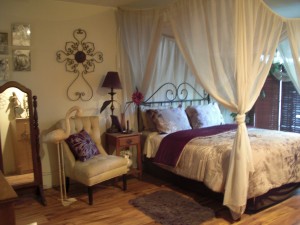 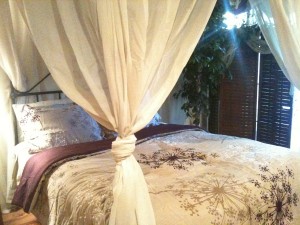 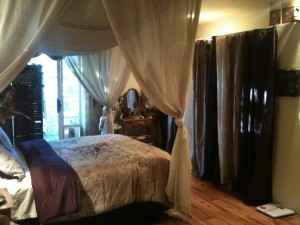 Other decorating touches were just moving items and wall hangings around. I just love this long-legged bird! 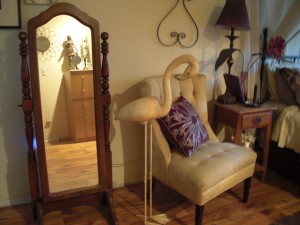 I didn’t move the location of the vintage woman with tray next to the vanity table, but I did re-organize what was on the tray and de-cluttered it some. 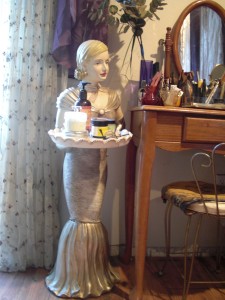 I also tidied up the makeup tray. 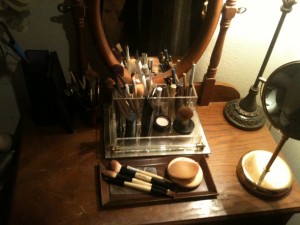 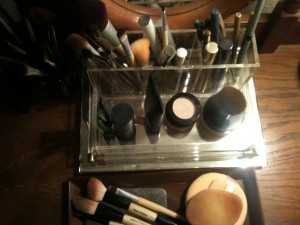 The items on the top of the dresser were also  replaced with fewer decorative items. Less is more, right?! (Like, “more better”, if I didn’t have to correct my grammar!) 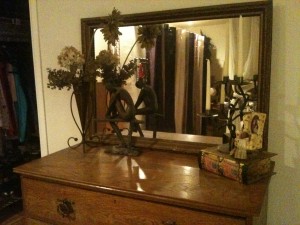 One of the walls took on a different look (although I’m wanting to add some more to this photo collection). These replaced an over-sized painting that was hidden when the floor mirror got moved in that space. That painting is displayed in another room now. 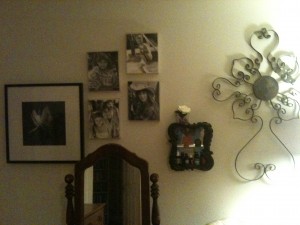 The last, but not least thing I wanted to do was re-organize the jewelry. Before, short necklaces were organized on an unattractive plastic hook-thingy (I believe a tie or belt hook-hanger) which was hung on the wall (and, by the way, wasn’t meant to be a wall hanging item!). 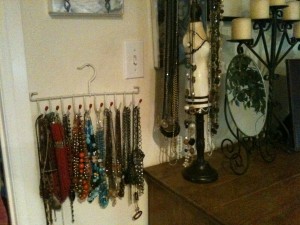 This was replaced with a jewelry organizer made from a toilet paper holder and S-hooks. (Note that, for clients who have more necklaces, I’ve used a towel rack and shower curtain hooks for hanging necklaces). 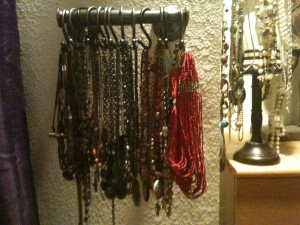 And these are hung right next to the table-top necklace-holder next to a viewing mirror. 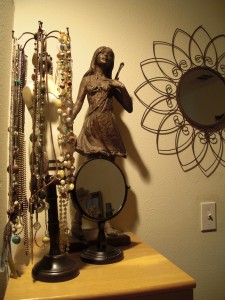 So, there you have it! A bedroom that’s not so tired anymore!